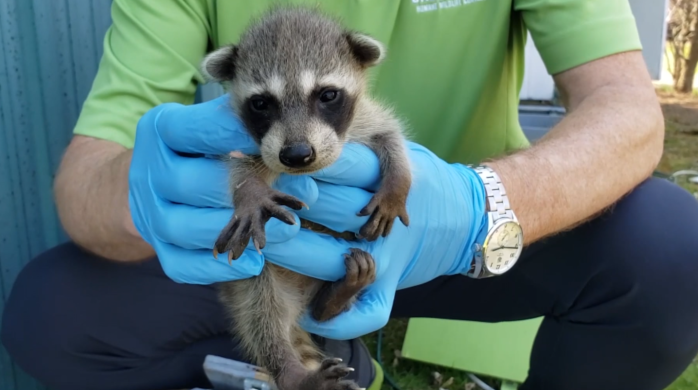 How To Know If A Raccoon Has Babies

Raccoons are incredibly adaptable animals that are completely at ease living amongst humans. For security against potential predators, raccoons prefer to make their homes above ground. With an amazing ability to climb, they easily gain access to roofs using trees, downspouts and in some cases climbing straight up walls. Using their intelligence, strength and hand-like paws, raccoons can easily gain access to almost any attic. Once inside, the protection, warmth and darkness provided by attics make them ideal raccoon den sites.

YOUR ATTIC IS A PERFECT PLACE TO RAISE BABIES

Raccoon mating season varies considerably by geography. In northern climates, mating begins in January and can extend through July with the peak period occurring from February to April. Nine weeks after mating, female raccoons will give birth to a litter of one to eight babies with a typical litter containing three to five. A female raccoon gives birth once per year although in cases where a litter of babies is lost early, a second litter may be produced in its place. Male and female raccoons do not form pairs and babies are raised by their mothers.

To ensure the survival of their young, female raccoons require secure den sites. Ideal locations include: chimneys and attics as well as spaces below additions, sheds, decks and porches. The babies are almost always stashed away in places that are nearly impossible for humans to access. WHEN DO RACCOONS HAVE BABIES?

Raccoon baby season falls between the late weeks of February and the early weeks of July. A female raccoon gives birth once per year to typically three to four kits, although in cases where a litter of babies is lost early, a second litter may be produced in its place.

To ensure the survival of their young, female raccoons require secure den sites. Ideal locations include: attics and chimneys as well as spaces below additions, sheds, decks and porches. The babies are almost always stashed away in places that are nearly impossible for humans to access. Attic spaces provide warm insulation for raccoon mothers to use as a warm blanket for her newborn babies.

THE LIFECYCLE OF RACCOON BABIES

Raccoon babies are born with their eyes closed and are capable of vocalizing almost immediately. Their constant squealing, chattering and crying is often mistaken for the song of a bird. By six weeks of age the babies will have begun to move and travel within the den site. During this time the noise and activity inside the attic usually becomes unbearable for most homeowners. Between weeks eight and twelve, they will have matured enough for their mother to take them foraging in the neighbourhood. To prevent mother raccoons from being separated from their babies, professional and humane removal is always the best option. Not only is separating raccoon families bad news for mothers and babies, it also makes your situation much worse. Baby raccoons left behind will die in an attic space, leaving a bigger and more hazardous mess for homeowners. Additionally, because raccoons are such great mothers, they will do anything to defend their kits, including attacking any person who tries to remove them from their den in an attic.

Skedaddle technicians are trained to quickly identify if raccoon babies are present and can pinpoint their exact location using thermal imaging cameras. Technicians will walk homeowners through each step of the removal process and provide them with the least invasive removal possible. After locating the kits, technicians hand remove each kit and place them in a heated baby reunion box near the entry point where they can safely wait for their mother to relocate them. Gaining access to babies can be extremely difficult in an attic space filled with insulation. Without the proper technology you will spend way more time searching the attic, disturbing the hazardous feces, and putting yourself in harm’s way of a protective mother raccoon.