Can You Feel a Bat Bite? skip to main content
Horror movies and political sensationalism have led to a widespread misunderstanding of bats. Most people assume these animals are vicious and unpredictable, leading to many phone calls for bat control Milwaukee. Bats are migratory, which means that just because you see an animal one night or day outside does not mean it will be there the next. How do you know if a bat is a threat or if you should just leave it alone? To demystify the species, it is necessary to get to the bottom of common misconceptions.

Bats do sometimes bite people, and they may even bite while you are sleeping. The bites can be painful because a bat's teeth are small, pointed, and razor-sharp, but if you are asleep when the bite occurs, you may not even know you were bitten. Sometimes a bite will not even break the skin, depending on the bat's intent.

Bats are not an aggressive species. In fact, they are shy and usually do everything in their power to avoid confrontation with humans. People who get bitten by a bat often have it happen when they are trying to handle the animal, which is not advisable. Too many people see the little furry bodies of bats and wrongly assume the animal is patient and friendly with human interaction. Like any other form of wildlife, though, a bat will defend itself from a perceived threat. However, if left alone bats will typically try to leave humans alone in turn.

Rabies in the Species 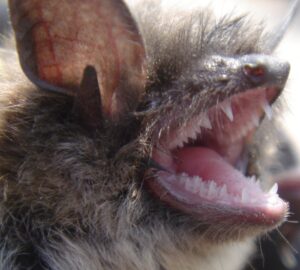 Bats are connected to most human rabies cases, but that does not mean the entire bat population is infected. Many organizations have skewed the data in ways that can create a panic in the community. The simple truth is that according to most research, less than 1% of the bat population has rabies, and that number more likely is closer to 0.5%. The fact is, rabies transmission is rare. If you look at the data, the presence of bat colonies in urban settings often does not equate to a higher level of rabies cases in people or pets. While the transmission of rabies to other species from a bat is possible, it is also rare, so there is no reason to assume a bat sighting around your home means you are at an increased risk of rabies.

Panic Due to Sensationalism

Unfortunately, government bodies and news media outlets are not always the most informed channels for learning about rabies, bat bites, and colonies. The spread of misinformation about rabies sometimes leads to panic about local bat species, even when the animals have no tie to a current crisis. It is better to discuss wildlife matters with wildlife experts. Do not believe unfounded hype.

If you know you have a bat colony close to your property and are wondering if bats bite and transmit rabies, then take preventative measures. Make sure all your pets have up-to-date rabies vaccines and keep your family and pets away from bats. Bats are nocturnal, which means they are more active at night and sleep through most of the day.  Knowing how the species behaves is the best way to avoid most accidental contact. If you do happen to find a bat sleeping in your home or flying around your house, then contact a wildlife expert immediately for safe removal. Bats are magnificent creatures, and like any other wild animal, and they deserve your respect. Do not put yourself or your family at unnecessary risk by trying to get a bat out of your home yourself. Contact our Skedaddle Humane Wildlife Control Milwaukee team for help to keep you, your family, and the wildlife safe.