Bats tend to divide people into two categories. Those who love them, appreciate their importance to the environment, or those who are afraid of them as a result of misinformation or folklore.

While we at Skedaddle Humane Wildlife Control are bat lovers, and value and appreciate their role in our ecosystem, we also want homeowners to be aware of the health hazards bats can sometimes present if they take up residence in your attic, walls, basement or chimney.

Many years of studies and research have found that in many areas of Canada, a large portion of rabies found in wild animals is caused by bat bites. In May of 2004 a study was done on the Status of Rabies in Elgin County of St. Thomas, Ontario, it found that from 1998 to 2005, 100% of the cases of animal rabies were caused by bats.

According to the CDC one of the most prevalent types of rabies comes directly from bats and is spread to other animals and humans quite easily. As noted before, since the time of the research done in St. Thomas, the most prevalent form of rabies among animals stemmed from the bat strain of rabies.

These types of facts point to the danger of handling the wildlife, ignoring bat infestations and the unsafe handling of decontamination found in or near a home. 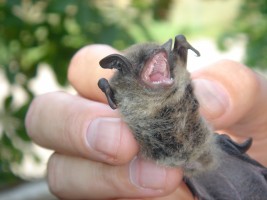 Bat teeth can scratch exposed skin or they can puncture the skin, but the bite resembles the appearance of a pin prick if it is visible at all. Rarely do the teeth leave the appearance of a full set of teeth biting. Bats bite only if they are sick, threatened or trapped, such as in a shirt or other clothing. This is rare. Physicians cannot look at a bite and diagnose it as a bat bite with complete certainty.

Another important point to make is that quite frequently a bite from a bat will go unnoticed or only be considered a simple scratch. Since bat teeth are very small and fine, they don’t always puncture the skin when they bite which can be misleading as the victim (if they’re human) may think nothing of it before it’s too late.

If the bite mark is on a household pet, the owners may fail to act as house pets get hurt and scratched all the time. Statistics have shown that 70% of human deaths caused by rabies were due to bat bites. They may be an integral part of a healthy ecosystem, but when it comes to human contact, the effects are obviously devastating.

How do I know right away if a bat is rabid?

With other ground dwelling animals like raccoons, skunks, opossums and coyotes, you can sometimes see signs that they have rabies, but with bats, it’s almost impossible.

The only way to truly determine of a bat is rabid is through laboratory testing. If a bat was found in the living area of a home it is recommended that it be captured by a professional wildlife control company and taken to your local health department to be tested. If it comes back positive for rabies, all persons in the home should see a doctor as soon as possible in order to get the post-exposure rabies vaccine.

As mentioned earlier in this article, when a bat bites a human or animal (especially a sleeping human) there’s a high chance the person may not know they were bit and if the bat is indeed rabid, you’ve got a serious problems on your hands.

When it comes to bats in your living space, we highly suggest that you always consult your doctor.

I had bats living in my wall. Now I have a smell. Is it safe to breathe the air?

While breathing the air may not be pleasant the largest issue associated with bat droppings is Histoplasmosis. This respiratory infection is caused by breathing in fungal spores found inside bird and bat droppings. The fungal spores can become airborne when they disturbed, that’s why it’s so important to hire a professional when cleaning up after removing bats.

Be aware also that bats may carry bat mites, fleas, and other insects, and they are likely to find a way into your living area. Also, if a bat is trapped, it may die, and the smell of the decomposing bat, as well as the guano, may be very unpleasant. It is best to have the bats removed as quickly as possible to prevent odor build up.

How should I deal with a bat infestation? If you have a bat infestation in your home or attic, one of the signs you’ll most definitely be seeing are piles and residue from bat guano. Bat guano is bat droppings, and is usually left behind around an entry point to a home or inside the walls and attic, close to where they are roosting. Droppings can contaminate the insulation and cause infectious spores to be released when the disturbed.

Hiring a local wildlife control company to take care of removing the bats is one part of the solution but what needs to be done about the bat droppings that you’ve discovered?

When bat control professionals clean up these droppings, they use industrial vacuums with special high-efficiency filters, thus reducing the risk to the worker and homeowner. Even then, the experts don protective clothing and air masks to avoid breathing the spores.

The dangers of bat infestations in your home

When an infestation occurs the only appropriate remedy is professional decontamination. Preventative bat entry measures are the tried and trusted way to completely avoid this mess.

Your attic and insulation may also be contaminated from the bat droppings and urine, so having that clean and replaced is recommended.

Co-Existing safely with bats in our community

Even though bats sometimes spread diseases to people, they are able to peacefully co-exist with humans and provide us with many benefits.

Worldwide, bats are a major predator of night-flying insects, including pests that cost farmers billions of dollars annually.  In addition, studies of bats have contributed to medical advances including the development of navigational aids for the blind. Unfortunately, many local populations of bats have been destroyed and many species are now endangered.

The best protection we can offer these unique animals is to learn more about their habits and recognize the value of living safely with them while preventing them from occupying our homes.

If you think you have a bat problem, do the safe thing and give Skedaddle Humane Wildlife Control a call: 1-877-222-9453