There are many different kinds of skunks. They vary in size (most are house cat-sized) and appear in a variety of striped, spotted, and swirled patterns—but all are a vivid black-and-white that makes them easily identifiable and may alert predators and humans to their pungent potential. The most commonly found skink is North America is the striped skunk. Skunks are gentle, non-aggressive creatures who have wrongly earned a bad reputation because of that pungent odour.

February through March is mating season for striped, hog-nosed, and hooded skunks, and that translates into “skunk smell.”

After a sixty day gestation period, female skunks give birth to a litter of pups in April or May. Older females come into estrus earlier in the season than younger females and, therefore, have their litters earlier in the spring. Older females also tend to have larger litters. Females can breed in their second summer. In a typical population of skunks the great majority of the females will be pregnant or will have just had litters.

Typically a litter consists of four to seven pups.  One male may breed several females. After mating, female skunks disperse from the winter den to a separate maternal den. Grass is usually gathered and brought into the maternal den for bedding.

The young are blind and deaf at birth with short, fine fur. Adult male skunks do not take part in rearing offspring. The young are nursed in the den for about six weeks before joining their mother on trips outside the den. By this time they are miniature replicas of adults. The young are weaned by about two months of age. The family group breaks up in the fall and the young move to new territory. They generally travel about six to 10 km in search of a new home; however, extremes of up to 50 km have been recorded. 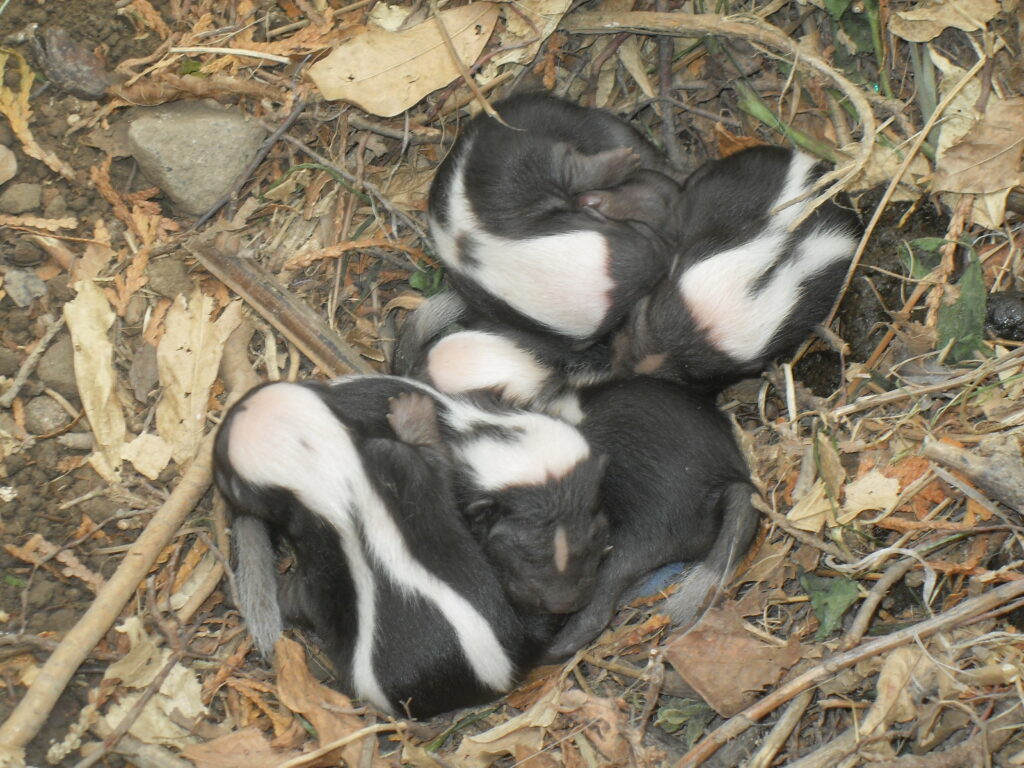 Signs you may have skunks

Skunks can be very smelly, especially from the mating season through the whelping season, if the female fights off a male. If the smell seems to come and go, and is more noticeable at dawn or dusk, or with a shift in wind direction, or seems to be coming from an area with evergreen trees, it might be the odour of a great horned owl. These owls commonly eat skunks. It is more likely you will smell a skunk than see one. Persistent, faint musk smells under a building or woodpile may suggest that a skunk has taken up residence. You may find small, shallow holes in the lawn, similar to those made by squirrels, which are a result of a skunk foraging for grubs and insect larva.

You may also find plants knocked over or damage to the lower leaves or ears of ripening garden crops, including corn. You should look for other clues as well because foxes also have their own musky scent that may cause misidentification.

Occasionally a skunk will wander into an open garage or shed, a compelling reason to secure all outbuildings.

Skunks spend prolonged periods inactive inside their dens during winter which can make their removal difficult. It is important to try and remove them in fall before the ground freezes. How to get rid of skunks

Skunk dens are often hard to access and a number of extraction techniques may be required. Killing or capturing the adult likely won’t solve the problem, since the babies may still be hiding in an inaccessible area under the building. Signs of digging and burrowing are the most common way to locate a skunk den. If a skunk sprays under the front step, the odour can easily find its way into the home and won’t dissipate for months.

Why trapping skunks is not the answer:

In Ontario, it is illegal to trap and relocate animals from the site where they were captured according to the Ministry of Natural Resources’ Fish and Wildlife Conservation Act.

What if there are baby skunks?

Most baby animals found are not mobile for several weeks to months after birth. That means the only way to remove them humanely is by hand. This method is both effective and significantly reduces any chance of injuring them. Once the babies have been retrieved, they are placed inside a specially designed and heated reunion box. This baby reunion box is designed so that it can be placed near the entry point so their mom can come back and get them.

Checking under your porches, sheds, patios and crawl spaces for openings that need to be sealed can keep skunks from coming into your home in search of food as well. If you have trees or bushes that harvest fruits, berries or nuts, check your yard often in search of those that have fallen on the ground and remove them. Remove all water sources that skunks can easily access as well. Make sure all garbage bins are securely sealed, and pet food is stored securely.

The key to getting the animals out from under these steps permanently is to block access. A Skedaddle Humane Wildlife Control technician will be able to tell you what work might be required to get the animals out and to keep them out, and to make you aware of potential issues that may be unseen behind the steps.

Skedaddle Humane Wildlife Control digs a trench and uses heavy-gauge screening to prevent skunks from gaining entry under porches, sheds, and anywhere without a foundation. They can be very persistent, so making sure you’re hiring someone with experience is the only way to combat those digging skunks!