What Are the Mating Habits of Squirrels? skip to main content
Sometimes the squirrels in your yard seem to be going crazy. Every time you look out the window there are squirrels fighting, squirrels chasing each other, and squirrels jumping from tree to tree. Are they mating or are they at war? Find out what they are doing and whether you need to contact Skedaddle Milwaukee squirrel removal.

Contrary to appearances, eastern gray squirrels are solitary creatures. Each has its own territory of up to a few acres where it spends time searching for food and loafing in trees. Although squirrels mark their territories with urine, the boundaries do overlap and individuals will squabble over food sources and den sites. Males (boars) and females (sows) look almost identical, with the only visible differences being in their reproductive organs. During the breeding season, these differences become quite obvious as increasing testosterone levels cause the male parts to swell. At other times of the year, the sexes can only be distinguished at close range. 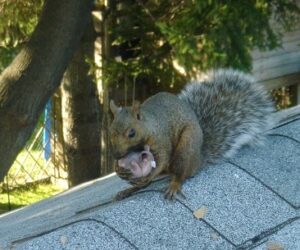 Twice per year — from January to February and again from May to June — everything in squirrel society seems to be in an uproar. Males can smell which females are fertile and begin to chase them. During their pursuit, they make a soft buzzing vocalization that mimics the sound of babies begging to nurse. Squirrels can run 20 miles per hour and jump eight feet in the air so the chases are quite dramatic. Males also fight among themselves at this time. Although both sexes have multiple partners, the first male to mate with a female is usually the one to sire the babies. This occurs because males can insert a waxy plug into females, creating a barrier to other males' sperm. Females can remove this plug, however, if they wish. Interestingly, genetic tests have shown that most babies in an area all share the same father, even when their mothers have mated with multiple males.

After the excitement of mating chases and male competitions, life goes back to normal. The only difference is that for the next 38-46 days, most adult females will be pregnant. Sometime during March to April and July to August, females will quietly give birth inside their dens. The males continue going about their business because the structure of a squirrel family is naturally a single-parent home. Squirrels do not mate for life, and males do not help with raising the babies. For the next six weeks, the female will spend most of her time in the den nursing her tiny kits, cleaning them, and removing their droppings. Once they leave the nest, the babies will stay in her territory for the first few weeks. This is the time when people notice what seems like a temporary squirrel population explosion in their yards.
[embed]https://www.youtube.com/watch?v=LiOhqzzmK4k[/embed]

Squirrel nests built outside of natural tree cavities, commonly referred to as dreys, are built approximately nine meters from the ground. From below, dreys superficially resemble hawks' nests. However, hawks tend to place their nests in a crotch near the trunk, whereas squirrels build theirs in the middle of the branch. Even though these dreys on a tree branch are cozy, the preferred location is actually inside a hole. When natural tree cavities are not available, squirrels will mistakenly nest in eaves, soffits, and attics of houses. It is no easy task to disrupt the reproductive instincts of a female squirrel intent on denning on an upper floor of your home. Trying to remove her on your own risks injury to both you and the animals. Skedaddle Humane Wildlife Control understands the mating habits of squirrels and can seal up possible entrances before babies are born, or if necessary, can remove the mother and babies without causing them harm. Call us for help with squirrel problems.